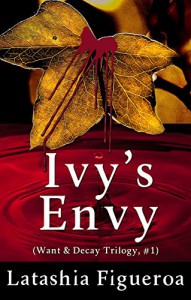 I received an ARC in exchange for an honest review.

The imagery was so vivid it leaped off the page. Ferguson’s use of language allowed me to feel and experience everything Ivy did. Granted, at the end of this story, I wish I couldn’t feel or see those things!

Ivy’s Envy is a well-written tale centered on a character who could be called Poisoned Ivy. She’s dark and dangerous, evil personified. There are no limits to what this person will do. But, there is such a thing as karma and she put plenty of bad karma in the universe. Unfortunately, Ivy got tangled in a web called Thomas. I won’t give anything a way. I’ll just say, payback is a b!

I couldn’t help wonder why Ivy behaved the way she did. Ferguson gave no indication in this novella as to what motivated the character. Perhaps that will be explored in a future book which I’d love to read.

The ending of Ivy’s Envy will not disappoint! It is shocking and makes you want to read more.

Overall, I enjoyed Ferguson’s story. The characters were interesting and the plot twist was stunning. I look forward to reading more from her.